LeSieur de la Verendrye came to this area in 1738. He and his fur traders were several years ahead of the Lewis and Clark expedition, which passed the future site of Bismarck in 1804, going upstream, and in 1806 going downstream. In 1832 David Mitchell operated Mitchell’s Fort for the American Fur Company at the old site of Wogansport, 18 miles northwest of what is now Bismarck. When Joseph Dietrich homesteaded along the banks of the Missouri in 1868 he would have never dreamed that someday this site would become North Dakota’s Capital City. 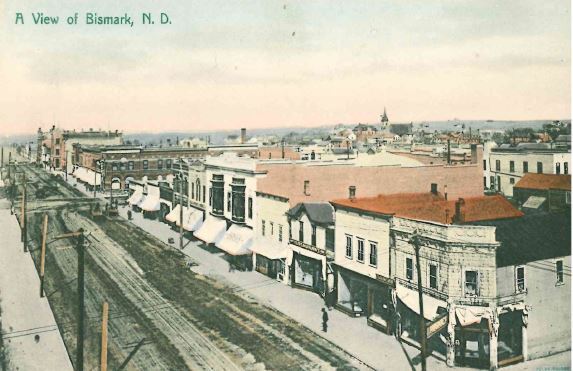 Reaching the Missouri River in 1872, the Northern Pacific Railroad decided to locate its terminus at what was then known as “The Crossing on the Missouri”. Called Burleigh Town, a small village two miles south of present Bismarck was established by Dr. Walter Burleigh who was a railroad contractor and speculator in charge of surveyors for the Lake Superior and Puget Sound Company (a firm working for Northern Pacific). This company also established Camp Greeley, named after Horace Greeley, a famous newspaper publisher. In 1872, the Ida Stockdale steamed up the Missouri and brought the first troops to this site, chosen as a military supply depot. The camp was later renamed Camp Hancock after General W. S. Hancock arrived to protect the railroad crew.

Between 1871 and 1872 a ramshackle town reminiscent of the gold rush camps established itself a mile east of Burleigh Town. The settlement, an eyesore to the higher military command, was nevertheless very popular with the common soldier. Carleton City sprouted across from Fort McKean at the popular river crossing and earned various names, such as Point Pleasant, Whiskey Point, and others that are unprintable. It sported 15 saloons, two stores, two livery stables and various houses of ill repute. The spring ice break of 1874 obliterated Sin City.

At the time of its birth in 1872, Bismarck was the only town west of Fargo, in the midst of Indian Territory. On May 14, 1872 a townsite was staked out and christened Edwinton in honor of Edwin Ferry Johnson of Vermont, civil engineer for the Northern Pacific Railway. He was the first to urge the building of a transcontinental railroad. It was before the first locomotive reached Edwinton in 1873 that Henry Villard, Secretary of Northern Pacific, drew a large map of the townsite – owing to the German immigrants, moving into the territory. It is situated on the east bank of the Missouri River at the point reached in 1873 by the westward construction of the Northern Pacific Railroad.

By February 16, 1873, the post office of Edwinton was established. On July 17, 1873, Bismarck was named in honor of Germany’s “Iron Chancellor” Prince Baron Otto Eduard Leopold Von Bismarck-Schoenhausen, a famous German statesman from Prussia, credited with the creation of the German Empire and serving as her first chancellor. At this time the railroad was in a financial bind and having trouble attracting investors. The name was given to encourage German capital in the railroad’s transcontinental construction program. The map of Bismarck was shown throughout Europe in hopes that the princely statesman would dig deeply into his wallet to get the small metropolis bearing his name on its feet. Bismarck did acknowledge his fledgling namesake with a heartfelt thank you note, but the fervently hoped for Reichsmarks did not materialize. Bismarck’s name stayed that way.

In July of 1873, the same month that Edwinton was named Bismarck; Burleigh County was organized. Bismarck had 147 buildings, primarily tents and log huts. The first church (Presbyterian) was built and used for a school. On July 6th of 1873, the first issue of the Bismarck Tribune came out. In June of 1874, the first law came to Bismarck. The first Mayor of Bismarck was Edmund Hackett, appointed by the Act of Territorial Legislature – then John McLean was elected in 1875. The city of Bismarck was incorporated on January 14, 1875.

In 1876 the Battle of the Little Big Horn put Bismarck on the world map. In 1877 the Sheridan House was built to house railroaders. Also in March of 1877, Bismarck was hit with its first major fire in the business district.

Following the arrival of the railroad, Bismarck quickly became a center of trade and transportation. Steamboat business developed and flourished for a time on the Missouri and Bismarck became a port as well as a railroad terminus until the railroad bridged the Missouri in 1883. Gold discoveries in the Black Hills made Bismarck a freight-shipping center, and long wagon trains pulled by oxen traversed the 300 mile “Custer Route” to the Black Hills.

In 1883, Bismarck became the Capital of the Dakota Territory. Six years later, when the Territory divided into two states, Bismarck became the capital of North Dakota. Since then Bismarck has developed into a major business, financial and cultural center with its retail trade area reaching over 100 miles and serving upwards of 200,000 people, also our wholesale trade services about 350,000 in western North Dakota as well as South Dakota and eastern Montana.

Bismarck is the state capital and the center of state government in North Dakota. The City of Bismarck’s form of government is a five-member city commission, elected at-large, of which the president is also the Mayor of the city. The City Commission meets every second and fourth Tuesday of each month. Click here to view Bismarck Mayors 1875 to present.

The National Oceanic and Atmospheric Administration’s weather compilation for Bismarck reports dispel some of the perceived ideas about North Dakota’s climate. Annually, Bismarck averages 16 inches of moisture. This includes both rain and snow. With regard to snow, North Dakota in reality has less annual average snowfall than cities like Minneapolis, Chicago, Detroit and Buffalo, New York. Our summers are warm with temperatures sometimes reaching as high as 100 degrees but with humidity that is extremely low. Our winters can, on occasion, become quite cold, however the simple solution to that is to dress a little warmer and use a little common sense on the road. There are very few workday losses due to bad weather. North Dakota, in fact, has the lowest rate or work stoppages for all causes, including weather, in the nation.

Bismarck Airport has five passenger airlines providing air service to seven direct destinations in the United States. In addition to passenger airlines, the airport has cargo operations with FedEx, UPS and other regional carriers.   Bismarck Airport also has two Fixed Based Operators that offer pilot training, air-taxi and charter services. Several truck lines to provide local, intrastate service. One bus terminal, 2 US highways such as Highway 83 and Interstate 94 going from east to west, north to south. The city also has several parking ramps accommodating around 1,754 vehicles.

Western North Dakota’s energy production is a major economic generator for the state. Bismarck is the corporate headquarters for a majority of the major energy companies working in North Dakota. Bismarck is within 85 miles of twelve coal-fired electrical generating facilities producing over 4000 megawatts of electricity. In addition, Bismarck is the corporate headquarters for Dakota Gasification, the owners and operators of North America’s only commercial lignite coal to synthetic natural gas production facility.

This plant, known as the Great Plains Coal Gasification facility is a $2.1 billion facility that was completed in 1984. The plant currently employs about 900 persons producing pipeline quality synthetic natural gas. The Great Plains Coal Gasification facility is beginning to develop the various byproducts that come out of the conversion process. To name just a few, these byproducts include rare gases, coal tars, sulfur, nitrogen, anhydrous ammonia, and CO2 which is used to enhance oil recovery in the nearby Williston Basin oil fields. Another major byproduct of the conversion process is the waste warm water used in the cooling towers of the gasification system. Currently, there are products that include the possibility of raising hot house roses, various vegetables such as tomatoes and lettuce and also for the use of raising fish and shrimp.

The North Dakota Heritage Center, an enduring monument to North Dakota’s past, has been constructed on the Capitol Grounds, including a main gallery with approximately 22,000 feet of exhibit space. It is much more than a museum; it houses collections of the historical society and is an educational center as well. The Heritage Center will be going through a major expansion soon.

Dakota Zoo, one of the finest open-air zoos in the Midwest, features native, exotic and domestic animals. The zoo is located between Sertoma Park and the Missouri River.

Bismarck offers a lifestyle that is difficult to imagine for someone who has never been to our city. The city offers one of the lowest crime rates in the nation, an outstanding educational system from kindergarten through graduate college degrees in both public and private educational institutions; outstanding recreational activities; hunting and fishing activities which are literally only minutes away from your front door. Being located on the Missouri River and only forty miles south of Lake Sakakawea (which has over 1600 miles of shoreline), Bismarck offers some of the finest trophy fishing in the nation. Upland game and waterfowl hunting is among the finest anywhere.