It is illegal to shovel or blow snow into the street. Snow plowing route priorities have been established to provide for the safe and orderly movement of vehicular traffic throughout the City during all weather conditions, including severe winter storms. 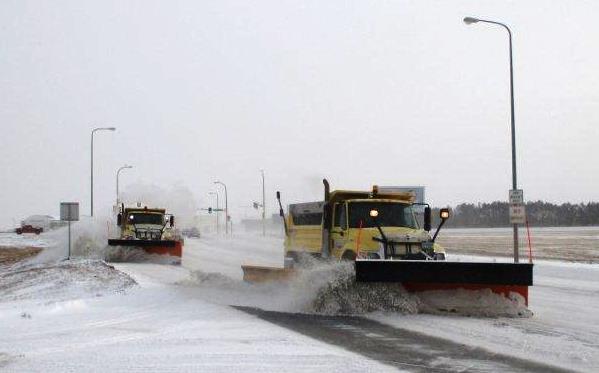 Streets designated as Major Arterial Routes are given Priority Three designations as they provide
a network connection of high traffic volume streets and business districts.

Streets designated as Residential Routes are given Priority Four designations as they provide a network connection to all
residential areas and complete the street network and grid system.

Generally 4" of snow accumulation will require the snow plowing of Residential Routes.

Note: You should be extremely cautious when snow removal and sanding operations are underway. These vehicles must stop and backup frequently, so you should stay a minimum of 50 feet behind them. Remember that a typical snow plow is wider than most driving lanes.

Clean Your Sidewalks of Snow and Ice

City residents are reminded to clean all snow and ice from their sidewalk including the crosswalk of corner lots. City Ordinance requires property owners to remove all snow and ice from their sidewalk
within 24 hours after its deposit. If is is not removed it may be removed by the City and the cost
charged to the property owner. To report sidewalk problems call the City Engineering Department
at 701-355-1505 or use a Citizen Request.

Snow Gates are used to make driveways passable (8 foot width driveways) and should reduce the amount of snow deposited by snow plows into driveways.  The snow will now be deposited at the side of the driveway. It is the property owner's responsibility to ensure that sightlines do not cause safety risks.

Contractors, businesses and residents are reminded that they shall not push snow into the street or across the street onto the boulevard when clearing parking lots and/or driveways. According to City Ordinance a person may not move, dump or deposit by any means any snow or ice accumulated on private property onto any public street, alley, or public right-of-way.  The fine for this violation is up to $1,000.

Adopt a Hydrant:  We ask for everyone’s help to clear snow from around the hydrants by “adopting” a hydrant in your neighborhood. This helps reduce the time it takes for the fire department to get water on a fire by ensuring that that we can find and access the fire hydrant when we need it most. By helping us you could save your neighbor’s house or your own in an emergency. The snow should be cleared 6 inches below all the caps and 3 to 4 feet around the hydrant. This gives firefighters the space they need to attach hoses and turn on water in case of a fire in your neighborhood. If you are a business owner, please take to time to ensure the hydrants in your area are kept clear also.”

Dumpsters:  It is the property owner’s responsibility to clear snow around dumpsters.  In order to ensure that the waste is emptied during the winter months the snow must be removed in front and around the container.  The container must be moved a minimum of 7 feet from where it is setting in order to be emptied.  The waste collection crew must be able to maneuver the container in order to hook it up to the truck.
Thank you for your cooperation.

Bismarck Snow Fighting Presentation Feb. 26, 2019
Data is reflected through January 2019 and does not include the entire winter season statistics.